“Humility is the virtue that distinguished Christianity from worldly wisdom.”  This quote is taken from one of my favorite devotional books, Praying with John Wesley.  It is attributed to Jeremy Taylor, an Anglican bishop that influenced John Wesley. David deSilva, the author of Praying with John Wesley writes, “Desire for advancing one’s status and defending one’s honor in worldly terms is not compatible with the desire to follow Jesus.”

“Advancing one’s status” – that one got to me as I read it again last week.  It was only a week ago that I knelt in front of the Bishop and received a stole, a Bible, and a certificate announcing that I now held a new status in the United Methodist Church.  I have advanced my status, and have the certificate to prove it (it will probably be in a frame and on a wall in my office in about six months or so).

The night after my ordination tornadoes ripped through central Illinois.  They passed about 30 miles north of my home.  They destroyed many homes in Dwight and Streator.  On Wednesday I went to meet a few people from the conference to help out with the cleanup in Streator.  The three of us that met there had all gone through the conference’s disaster response training.

After going through a daylong seminar about disaster response, we were all given special green t-shirts as well as photo badges that announced our status as trained and registered early responders.  The three of us showed up at the Streator Fire Department with wheel barrows, shovels, gloves and special shirts and official badges.  We were promptly put in a van (without all of our equipment we were so proud of), and dropped off at a public park.  We were told, “Pick stuff up and bring it over here.”

We stood there for a second, not sure of what to do.  First of all, the damage left me a little dumbstruck.  We were at a baseball complex.  Two of the backstops were crumpled like aluminum foil.  Several of the light posts were snapped in half.  Brick dugouts were piles of rubble.  A cement shed was toppled.  Another field was relatively untouched.  Shingles, limbs, splintered wood, nails, and glass were scattered everywhere.

The three of us just stood there, not sure what to do.  There were about 50 people at work.  Some were dragging garbage cans full of debris.  Some were working on a pile of bricks.  It was hot and humid, I didn’t know where to begin, so I just wandered around for awhile, picking up random things and holding them in my hands.  I started to get annoyed.

Didn’t anyone notice my green shirt?  Didn’t you see my badge?  I am a trained disaster responder.  I am here to help – to do real work – not to pick up litter at a baseball field.  I’m an ordained Elder, for crying out loud, shouldn’t I have an important job to do.  I am, like Ron Burgundy, kind of a big deal.

Eventually I found an empty can.  I found a field that no one was working on, and I started to pick things up.  I picked up shingles – so many shingles.  I picked up nails and splinters of wood and broken limbs. I looked at the baseball field and realized how important this work really was.

It was a beautiful baseball complex – surely a point of pride for the community.  I realized that if I could clean up this field, it could be a place kids could come and play, and hopefully forget about the destruction.  Maybe in some small way I could help families get back to their normal life.  Maybe I could pick up enough nails and glass and make the field safe for a kid to have fun again. 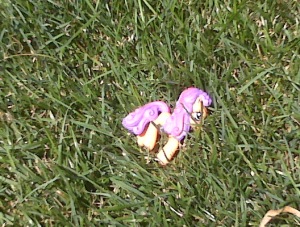 In the heat of the day, knelt down to pick up a pile of debris.  I thought about those shingles.  They had come off of someone’s roof.  I was literally picking up pieces of someone’s home.  Then I saw something that really didn’t belong.  It was pink.  It was a tiny little toy pony.  In the midst of the debris, there was a little girl’s toy.  I know a little girl that loves her toy ponies. I cried.  I knelt in that field and cried as I held that toy.  I realized that I was sitting in almost the exact posture I had sat just a few days before while being ordained.

That’s when I knew what humility was all about.  Following Christ is not about stoles or certificates.  Being a pastor is not about compliments after a great sermon, and it is not even about building bigger churches. Being a disciple of Christ is not about “advancing one’s status.” I learned – or maybe was reminded of – an important lesson: the best way I know to follow Christ, is by getting down on my knees to serve.