Aside
↓ Jump to Comments

So, what do you do when you fall short of a goal? 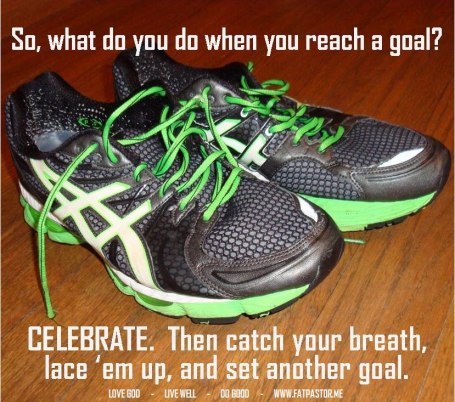 I created this meme in February, shortly after reaching my goal weight of 260, down from 329.  Now seven months later I have to ask myself another question: “What do you do when you fall short of the goal?”

Sunday was the Quad City Marathon.  At 7:30 a.m. on Sunday a few thousand people gathered at the starting line, which was just a few blocks from where I was sitting as I prepared for worship.

That was not the plan.

I consider preaching a tremendous honor.  I always find it remarkable that over 200 people are willing to gather and listen to me talk for 20 minutes.  I understand that there is a lot more than that going on in worship, but it is still a very humbling experience.  As an Associate Pastor, I usually jump at the chance to preach.  It is probably my favorite thing to do in ministry.  Yet on this Sunday, I was a little disappointed.  I did not let this affect my preaching, but I knew I was only available to preach that Sunday because I had fallen short of a goal.

In May I finished a 10-mile run in Chicago.  It was a great experience.  I met my goal of finishing the race in under 100 minutes.  Shortly after the race, I decided that I could go farther.  I set a new goal – run the Quad City Half Marathon.  Up to that point, I had made a habit of crushing goals.  Finish a 5K? Did that in June 2012.  Run a full 5K without walking? October 2012.  Run a 5K in less than 30 minutes? March 2013.  I even won a running trophy in June, something that I had not even considered possible.  I watched the movie “Spirit of the Marathon,” and was convinced that there was nothing that could stop me from the September half-marathon.  “Who knows?” I thought with much gravitas. “After I knock of the half in September, the Chicago marathon will be doable in October.”

Then the summer happened.  Vacation, lack of regular schedule, and various excuses hit me.  The next thing I knew, I had lost a few minutes off of my 5K, gained 10 pounds, and running 13.1 miles seemed impossible again.  I had a pretty good winning streak going, but streaks were made to be snapped right?

It hurts, but this will not defeat me.  I had a setback, but I will continue.  Since writing about my backslide in the middle of the summer, I have gotten back to running and lifting more regularly.  I’m back down five pounds, meaning I’ve kept under my goal weight for seven months.  I have a chest cold right now, so I’m not pushing the cardio-vascular, but I’ve gained strength during my cold.  I signed up for another race next Saturday.  It’s an 8K (roughly 5 miles), a distance I’ve never done.  I’m probably going to run another 5K at the end of October, and my goal is to set another PR.

Getting back to my first question; I think the answer is remarkably similar to what I did all those times I reached my goals.  “What do you do when you reach a goal?” The answer was simple. “Celebrate.  Then catch your breath, lace ’em up, and set another goal.”  What should I do after falling short of my goal?  Reflect. Then forgive myself, lace ’em up, and set another goal.

I didn’t run the Half Marathon, but there will be another.  I’m pretty certain that The Chicago Marathon will be run in 2014, and Chicago is beautiful in October.

6 responses to “So, what do you do when you fall short of a goal?”