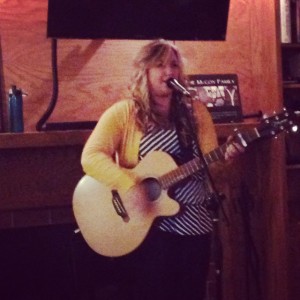 Click on the picture to see a part of Amy’s house concert.

It was a nearly perfect night.  Ever since, I’ve been thinking, “Can we do that again?”

We gathered in at our home.  It was the first cool night of autumn, and we started the night with some chili and hot apple cider around a fire pit.  Then we came inside.  There were 15 friends sitting in couches and chairs around our living room.  Amy Cox, a talented singer-songwriter with a heart for Jesus and a passion for justice, brought her guitar, a mic, and a small speaker.

She sang.  She told stories.  The kids came and went as they pleased.  The older ones stayed upstairs, listened to the music and whispered to each other in their own little world. The younger ones came and went, going from the floor to the basement to play when they felt like being more rambunctious.  The littlest ones stayed in laps and arms – not necessarily the laps and arms of their own parents.  At one point I looked around at this group of people, all of whom I care for deeply, and my heart was warmed.

It was a holy moment, one which I want to re-create.  My wife and I have talked since.  “Do you think we could do that again?”  And time and again our answer is, “I don’t know if we can, but we need to try.”  Unfortunately, Amy Cox isn’t available.  She’s busy planting a church in Virginia, and I wish her success.  She was able to come through the Quad Cities on a cross-country trip to San Diego, and I’m so glad she was able share a night with us.

Luckily, I have some friends with some musical talent, and I’m hoping we can create something together.  Picture this:

It’s a Thursday night.  People come to our house at 6:30.  Hopefully everybody’s had dinner, but we’ll have some small snacks, wine, coffee, and we’ll just chat for a little while as everyone arrives.  Eventually, we’ll write down something for which we would like prayer, and throw it in a basket.  All are invited to share if they’d like, but don’t have to.  We share a brief time of prayer and silence.  Someone with a guitar leads sings a couple of songs.  Some sing along.  Some of the kids stick around for the music.  Some have gone down to the basement to play.  Someone reads a passage of Scripture.  I talk about it for ten minutes or so.  It’s not really a sermon – more like a guided discussion.  We wrap up the discussion, then we talk about a mission or ministry – local or global – and take an offering for it.  Sometimes instead of an offering, we might put do some kind of hands-on mission.  Then I get a nice loaf of bread and grape juice, and we share in Communion.  We sing another song or two, and go home.  Before we leave, everyone takes one of the prayers that was written down at the beginning of the night and we promise to be in prayer for whatever we draw over the course of the week.

This is my vision.  It is kind of scary to put it out there like this, but I do so because I wonder, does anyone out there have a similar experience?  What kind of worship have you experienced outside of church walls?  What is the value of gathering in homes?  What are the pitfalls?  I’d love to hear from you.