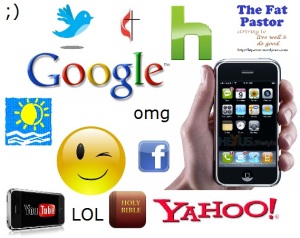 From Top Left: Winking smiley, the twitter bird, the cross and flame of the United Methodist Church, hulu, The logo for the greatest blog ever written, the Orwellian behemoth known as Google, an iphone, the logo for Riverside United Methodist Church, another winking smiley, Oh My Gosh (cry of astonishment), facebook, youtube, Laugh Out Loud (something people are rarely doing when they type those letters) an icon for a Bible iphone app, Yahoo.

I wonder how many people would be able to look at the picture above and know what all of these pictures mean.  Considering one of the images is the logo from this blog, and another is the logo from my church, I’m guessing that very few would know all of them.  I wonder though, how many from our churches would know what the little blue bird represents?  How many people in our congregations haven’t the slightest idea what a tweet is?

Many of the same people who are (sometimes proudly) technophobic, digging in their heals against the use of social media, technology, and other new forms of communication, are also despondent about the lack of young people sitting amongst them in their pews.  They talk longingly of the “good old days” when the churches were full and the Sunday school was bustling, and the building was growing, and the budgets were plentiful (never mind that the good old days also included silence on issues like domestic violence, racial equality, and an utter lack of understanding or compassion surrounding gender issues).

Youth culture has always been misunderstood by adults.  That is why it is called “youth culture.”  Youth have a different way of communicating and relating to their friends.  They have a different understanding of what it means to be a citizen, what good music is, and what is funny.  Youth are no longer satisfied with consuming media – they want to participate in it.  Things like twitter, facebook, youtube have given young people a platform to broadcast every detail of their lives.  And the funny thing is – people are listening.  A video of some kid lip syncing a song in front of their computer camera has been watched by millions of people.  Millions!  Big downtown cathedrals that were filled in the 50s might have reached 5,000 – maybe.

All this boils down to this: If you want to communicate to young people, you need to know a new language.  The church needs translators.  In order to reach people with the good news of Jesus Christ, people need to be able to speak the language of those we are trying to reach.  And if we are trying to reach young people, you have to at least know what those things are.

The images above represent vast changes in culture and language.  Google used to be a number.  Then it was a website.  Now it is a verb.  Hulu – and other technologies – have rendered such cultural stalwarts like Primetime Network Programming obsolete.  There are no networks.  There is no prime time.  Facebook has changed the way we think about things like privacy, photo albums, prayer, politics, and even wedding invitations.

There is a new language, and if we are going to translate the language of Jesus Christ – the language of grace, forgiveness, compassion, justice, and love, we need to know the new language.  It doesn’t mean that you have to run out and get a twitter account, but you should at least learn what it is.  Translation however, is about more than facebook pages, blogs, and tweets.  Translation is about taking the time to build relationships.

It is my deepest conviction that the heart of the Gospel message is relationship.  It is about our relationship with God and our relationship with one another.  The best way to translate the Good News of Jesus Christ is to live the Good News of Jesus Christ.  The best way to teach a young person about a faith that changes the world is to go out and change the world.  Jesus Christ has the power to transform lives, but it doesn’t always happen with a well-reasoned argument or an insightful Bible lesson.  It happens when someone who is already in love with Jesus tells somebody else about that love.

We need translators of the Gospel.  We need people who are willing to take the time to live authentic relationships with young people.  And authentic is the key.  We cannot put on airs.  Young people are savvy.  They see through BS.  That is why knowing the language is so important, we can’t fake it.  Translation only happens when people sincerely care.  Translation begins at home.  Young people might rebel, but their most important influence always has been and always will be their parents.