Running has become a huge part of my life.  Running in official races has been one of the most important factors my transformation.  Since February 2012, I have have gone from 325 pounds to 250 pounds.  In June 2012 I ran my first 5K in just under 36 minutes.  I ran three more in 2012, trimming minutes off of each of my times.  Throughout the winter, I continued to train.  In March 2013 I knocked off almost 5 minutes from my personal best.  All of these races have come within the span of a year.  Eventually this crazy rate of improvement will slow down.

The Soldier Field 10 was the most rewarding run yet.  After crossing the finish line I was able to pause for a moment and reflect on what I had just accomplished.  When I registered for the race in January, I had set a goal of finishing in 1:50.00.  By the time of the race, I had moved my goal up to 1:40.00.  I knew that a 10-minute-mile pace was going to be tough.  It was tough, but I made it.

Before the race. Soldier Field is a such a beautiful place. It’s too bad that they had that UFO land in the middle of it.

There were 12000 people that ran the race. We were gathered in corrals. The starting system was ingenious and really kept things moving. Right from the beginning of the race, there was plenty of room to run. I did a lot of passing, and never really had trouble getting through traffic.

Before the race. Someone asked me what I was listening to. At this point, I had not turned on the music. I listening to books during long runs. They seem to keep my calm, whereas music can play with my emotions. At about the sixth mile I turned on the music for an emotional lift. Mumford and Sons was the soundtrack for my last few miles. 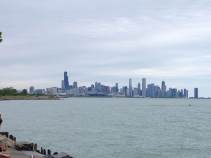 At about the sixth mile I was starting to get tired. After the emotional lift of passing the halfway point, I was in need of another lift. Then Mumford and Sons’ “Awake My Soul” came on just as this spectacular view came into focus. It was an amazing jolt of energy. I raised my hands in praise as I ran and said a prayer of thanksgiving.

believe this was shortly before the 8 mile mark. The stadium was tantalizingly close.

Very early in the race I started to repeat to myself, “this is for my girls, but it is because of my Angel.” I was doing this for my daughters, but I was only able to do it because of my wife. As I ran, the mantra came over and over “For them. Because of her.” At eight miles I was starting to wear down. My legs had never been so tired. So I pulled out the phone and texted Sarah. “8 miles done for them. Because of you.” 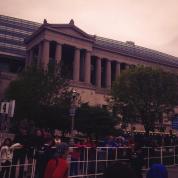 I snapped this picture as I was running. Sarah was waiting for me about a hundred yards after this. I got a little choked up when I saw her. I was so happy because when I saw her I knew I was going to make it under my goal.

As we ran through the innards of the stadium, “Bear Down” was being played. That was a cool touch. This was the view as we emerged from the tunnel. It was a very nice moment.

Inside the stadium after the race. After making such a big deal about being able to finish inside Soldier Field, the organizers were really trying to herd us through to the exits. I paused long enough to catch my breath, and there were people telling me to move on. I didn’t. I lingered. I had just run for 98 minutes to get onto that field, I was going to savor it.

I took this shot of the finish line before I left the field.

After the race, a young man in uniform gave me this medal. It seemed backwards. I shook his hand firmly and thanked him for the medal, and for his service.

Sarah said later that was probably the best seat she will ever have in Soldier Field. I was so glad she was there. It would have been cool if my daughters had been there, but it would have been tough getting them there that early. This was a very nice moment when I hugged her and thanked her for helping me get this far.

The medal is nice. Not sure what to do with it now, though. I just took out my schedule of runs for the summer. My next goals are a sub 25-minute 5K, and a half marathon.