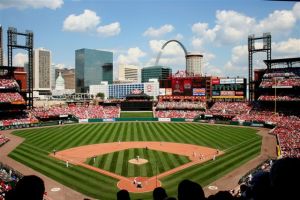 Busch Stadium in St. Louis, one of my favorite places on earth.

I love the colors of baseball.  Blue, gold, white, and green.  These are the colors of baseball for me.  Blue sky.  Green grass.  Golden infield with crisp white lines.  I always pause at the first site of the field.  Everything is perfect.  Nobody has kicked up the batter’s box.  Nobody has groomed their own place in the field.  The rubber and the bases shine.  The scoreboard is big and bright and full of information, but right now there are only zeroes on it.

I love the smell of baseball.  The cinamon from the churro stand.  Onions caramelizing on the grill.  Hot dogs sizzling on their roasters. I breathe it in.  I don’t bring my glove to games (because I’m a grown man), but I can still smell the leather. I’ve buried my face in my glove enough times to recall the smell – especially at a ballgame. I find my seat and evaluate my odds of getting a foul ball. I fill out the lineup card and let the sun pour over me. I look at the names on my scorecard and wonder, “Who’s going to hit a home run?  Who will get the first hit?”

I love the sounds of baseball.  The vendors are hawking their $9 beers. The crowd is a low murmur, ready to explode in an instant. The organ plays tunes that were not meant to be played by pipe organs, but somehow they fit. The game starts, and I wait for the greatest sound of them all: bat on ball. The crowd comes alive. The players move in perfect synchronicity to the place they need to be – covering every possible angle that the ball may travel.

I’ve never been to a game on Opening Day, but I can only imagine the sense of excitement. For those in the city that that celebrated just a few months ago, or those in places that have been waiting generations, the excitement of Opening Day is connected directly to hope.  Hope springs eternal on Opening Day The team hasn’t lost a game yet.  Everyone’s in first place. Every team has a chance. Every fan knows that on Opening Day, anything can happen.

For those of us that love the game, baseball is the soundtrack of the summer.  It will be on the radio and TV.  We will check scores from phones, and open up the agate page in the sports page.  Phrases like “rubber match, games back, get-away day,” will reenter our vocabulary.  Every fan hopes that what begins with a cool day in April will end with a cool celebration in October.

Isn’t that what life is all about? When I die, I don’t expect that there will be a parade, but I have assurance to know that there will be a great celebration. Jesus gave us some simple instructions for life, “Follow me,” he said. Follow him in service, compassion, grace, and love. He told us to love ourselves, love our neighbors, and love our God. He told us to break bread with each other, forgive and be forgiven, and be willing to sacrifice for the sake of others.

We go through this season of life and surely there are going to be slumps, bad outings, and losing streaks. Everyone faces the dog-days of summer and the nagging insecurities of a fallen world and a sinful nature. Today though, we have hope. Today can be Opening Day. There are a lot of questions we have to answer. There is potential that we can still unlock. There are stories to be told, and lives that we can touch. There swings to be swung, pitches to be pitched, and games to be won. Today is Opening Day.

Why I love baseball

This is Part 5 of the series Journey to Hope, a Rethink Church study.

Temptation is an interesting subject for a study about hope.  It doesn’t seem like it really fits.  Where is the hope in temptation?  I think that over the last six weeks I’ve discovered it.

Hope does not dwell in temptation.  Hope dwells in knowing temptation does not have to win.  According to this week’s Journey to Hope, a 20011 survey listed some of the biggest temptations that people face.

This list is a mix of some of the standby temptations – cheating, lying, anger, lust; and some very new, like the overuse of social media.  Some of them have probably been around awhile, but I can’t help but feel that overeating, laziness, and procrastination have only recently ascended to such a high level.

I’m not interested in posting an online confessional.  I can say that some point in my life I have struggled with all of these temptations.  Today some are stronger than others, but everyday we are all faced with strong temptation.  The one that I’ve been working on the most lately is overeating.

Temptation, thy name is Doritos.

This is a picture of my strongest temptation.  I remember once as a kid I ate an entire bag of Doritos while watching He-Man.  I cannot tell you how much I would enjoy doing that exact same thing right now.

But I’m not gonna do it.

Over the last six weeks I’ve discovered a couple of things (that I already should have known).  One is, I don’t have to eat Doritos to be happy.  I can eat a lot less than I had been eating.  About six weeks ago the Lose It! app came out for my Nook.  I began using the app by giving it my weight (329 pounds as of 2/15/12).  Then I gave it my goal weight.  Then I told it I wanted to lose one pound a week.  It then gives me a calorie budget.  Everything that goes into my mouth goes into my app.  For six weeks I’ve logged everything, and I’ve only been over my budget three days.  It turns out, I can eat less.  I’ve known for a long time that I ate too much, but I just couldn’t stop – at least that’s what I thought.

In 2008 I started my blog when I was shocked to find out that I weighed 301 pounds.  Ever since then, my weight has slowly crept up.  I’ve gone through three sizes of shirts, and literally broken several belts.  Over the last three years I have worked out sporadically, but the times I went to the gym simply slowed the gain.  I think that the last time I lost any significant amount of weight was 2006, when I ran a 5 mile St. Patrick’s Day Run in St. Louis.  Ever since then, it has been a steady climb.

Finally though, I feel something has clicked.  I’ve had a turning point in my life, and it started with using that app.  It has changed my relationship with food.  I am still tempted by the bag of Doritos and the brownies and the second helping, but I’ve said “no” to temptation more times in the last six weeks than I had – maybe ever.

I have a long way to go, but I know that I am going to succeed.  I’ve invited God along with me on this journey.  My wife has also dedicated herself to our new lifestyle.  I have a whole group of friends at church that are doing a 90-Day challenge with me.  I also have about 1000 “fans” on Facebook that encourage me every time I post something about my workout.  I think this is the key to fighting temptation.  The people on this journey with me have been instrumental in my recent success. Doing it alone is a formula for failure.  We are called to be in relationship for many reasons.  Accountability, inspiration, motivation, and support are just a few of them.

When we look to God to help guide us through the temptation, it becomes possible.  When we realize that we are all in this together, it becomes a little easier.  1 Corinthians 10:13 tells us:

“No temptation has seized you that isn’t common for all people.  But God is faithful.  He won’t allow you to be tempted beyond your abilities.  Instead, with the temptation, God will also supply a way out so that you will be able to endure it.”

Watch the interview with George Acevedo on the Journey to Hope page.  He has built a recovery ministry for those struggling with chemical dependence.  He has helped thousands deal with temptation, and he provides this message of hope, “God provides a way of escape.  The creator of the universe that loves us most and best gives us tools… There is hope in the midst of temptation because [we’ve] discovered this way to escape.  We have discovered that God says it is available to us.”