A journal entry from 12 years ago gave me goosebumps 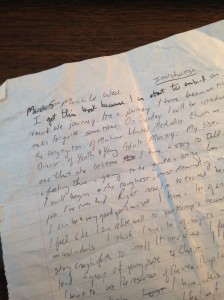 While packing up my house last month I came across a notebook I had not seen in many years.  I didn’t recognize it at first.  When I opened it up, a torn page fell out.  On it was an entry into a journal that I started to keep in 2002.  At the time, I was 24 years old.  I was living with my wife of eight months in a two-bedroom apartment in Peoria.  I was working my first full-time job as the head of the Children’s Book section at Barnes and Noble.  It was a great job, but I had felt frustrated.  I first heard the calling into ministry at age 15.  It was my Mom’s idea, and try as I might, it was an idea I couldn’t ignore.

My wife and I had found a church which we kind of liked, but it was difficult to get involved more than an occasional Sunday worship.  Working retail hours made it difficult to plan more than a couple of weeks out.  It was nearly impossible to join a Sunday school class, or the choir, or any of the regular things that help get acclimated into the life of a church.  So I started to pray.  I prayed that God would help me find a new job that would make it easier to get involved in church again.

Shortly thereafter I found a four-line ad in the Peoria Journal.  A small church about 30 minutes away was hiring a part-time Director of Youth and Young Adult Ministries.  I applied.  “I have no experience.  No training.  No qualifications,” I told the interview team.  “There is no reason you should hire me, except that I think this is what I’m supposed to be doing.  And I think I’d be pretty good at it.”  They believed me.  They took a chance on me, and hired me.  Here’s the first page of my journal before starting at Mackinaw United Methodist Church.

I bought this book because I am about to embark on a remarkable journey.  It is a journey I have been waiting to make for quite some time.  On sunday I will be introduced to the congregation of Mackinaw United Methodist Church as the new Director of Youth and Young Adult Ministries.  My sister once told me that she believes I have a story to tell.  I have a feeling this is going to be quite a story.

In a few days I will begin the toughest, most demanding, and most important job I’ve ever had.  Right now I’m excited because I think I can be a very good youth minister.  I have a lot of energy and enthusiasm.  I feel like I can relate well to teenagers because I will respect them as individuals.  I think I have a lot of insights into the Bible and a strong-enough faith to instill it into others.  I feel like I will be able to lead a group of young people to Christ.  I have a lot of good ideas.  Right now I feel as if I’m ready to dive in and start shaping lives.

At the same time I’m terrified.  I’ve never really done anything like this.  I don’t know the Bible that well, and I have no idea how to teach others about it.  I have no idea how I’m going to answer tough questions.  I still have questions myself.  Is homosexuality a sin?  Can you be gay and be saved? Are all Muslims going to hell?  What about the people who have never heard of Jesus, where do they go? Are we near the end times?  What if they see through me and realize I’m just a big impostor?  What if they see I have no idea what I’m doing?

On the job training is one thing, but we’re talking about souls here, not putting a book on the wrong shelf.  This is the most important job I’ve ever had, by a long shot.  I mean, second place isn’t even close.  Since I was 15 years old I’ve known that this was my path.  I’ve always felt it was a part of God’s plan for my life, but it was always somewhere in the future.  Well, it’s still in the future, about four days into the future.

Like I said, I’m about to embark on a journey.  Tomorrow I will meet with Rev. Dan to start figuring out some details of my job.  I have a feeling I’ll be figuring out the details of this job for some time to come.  “The first year as a youth minister for a totally untrained young man.”  It could be an interesting story.  I’m looking forward to writing it.

Those Mackinaw kids will forever hold a special place in my heart.  They’re all grown up now.  College, jobs, marriages, kids.  They were an amazing collection of young people, and Sarah and I have stayed in touch with many of them.  We were in Mackinaw for a year and a half before we decided to go to seminary.  Saying goodbye to those kids and that church was a difficult time.  Yet we left with so much joy at the time we shared, and so much hope for what was to come.  I’m now serving in my fourth church since Mackinaw.  Each goodbye was difficult.  Every hello has been a blessing.

12 years later.  Joy and hope.  Goodbyes and hellos.  A few questions answered. A few lessons learned. I’ve started as the Pastor of Two Rivers Church in Rock Island.  I’m still figuring out the details of this job, but I’m having a blast writing the story…