Dr. Seuss Tells the Sermon on the Mount, Part 2: The Lorax

Theodore Geisel, the man millions know simply as Dr. Seuss, was not a religious man.  That doesn’t mean that his work didn’t have deeply religious themes.  I’m currently working on a sermon series called “Dr. Seuss Tells the Sermon on the Mount.”  It is a five-part series where I go through Jesus’ most important teaching, as found in the Gospel of Matthew, and relate the texts to different Dr. Seuss classics.

The Lorax is a cautionary tale.  It opens in a land that is gray and foresaken.  There are stumps littering the countryside and smog fills the sky.  There is a city off in the distance, but the only remnant of life in the desolate land is a tower.  A boy ventures out into this wilderness in hopes of hearing the story of how it all came to be.  Once he gets to the tower, a man named Once-ler tells the story.

One day long ago, Once-ler happened upon a beautiful land full of trees, animals, birds, and fish.  The trees, he finds, can be harvested to produce something he calls a “thneed,” and a “thneed is a something that everyone needs.”  Immediately upon chopping down one of the truffula trees, a little orange mustachioed creature appears, “I am the Lorax,” he declares. “I speak for the trees.”  The tale that is spun is a familiar one.  While the Once-ler “biggers and biggers” his operations, and “biggers and biggers” his profits, there are unintended side effects.  The animals have no place to play.  The fish have no place to swim, and the birds have no place to fly as the waste from the Thneed factory lays waste to the land.  Despite the Lorax’s loud protestations, the Onceler keeps going, with employees to feed, he needs to make thneeds, and cares for little else.  Finally, the last truffula tree is chopped down.  The Lorax lifts himself out of the place, and the Once-ler’s tale seems to come to an end. 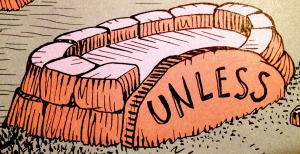 Back at the “present day,” the business-tycoon-turned-hermit puzzles over the little monument that the Lorax left behind.  It is a small pile of rocks with one word, “Unless.”  Finally, Once-ler seems to understand the Lorax’s cryptic message.  “Unless someone like you cares a whole awful lot, nothing’s going to get better.  It’s not,” the Once-ler tells the boy.  With that, he throws down to the boy a seed.  The very last truffula seed.

Dr. Suess is famous for open-endings.  So often he allows the reader to finish the story.  Here, the reader is thrust into the role of the boy hearing from the Once-ler.  After finishing the book, I feel like if I shake loose the pages a seed might fall out.  Surrounded by desolation and despair, a small monument stands as a shrine to hope.  This book is a clear warning about economic growth at the expense of ecologic disaster.  Whole sermons can be preached on the stewardship of the earth, and the importance of protecting the brown barbaloots and the humming fish.  Instead, I focus the two worlds that Seuss once again presents.

Last time we looked at Yertle the Turtle, and were reminded that in the Kindgom of God, even the burp of a lowly turtle name Mack matters.  Seuss showed clearly two ways of understanding the world.  One was to climb to the top by any means necessary.  The other was to care about those on the bottom of the pile.

In The Lorax, Seuss presents us with two ways of understanding the world.  There is the way of the Once-ler, whose primary goal is to bigger his profits.  He cares nothing about the future implications of his actions.  Even his name reveals what he values – using something once.  In the end, he winds up separated from the community, with nothing but disaster surrounding him.  Then there is the way of the Lorax.  The Lorax understands community.  He values the interconnection of all things, and speaks up for those who have no voice.  Once there is no community, the Lorax can no longer exist in that place.  Two value systems.  You might say, two kingdoms.  One where once rules.  Another  where community matters.

When Jesus came to preach about the Sermon on the Mount, he did so in community.  He gathered with the crowds, and told them something they may not have been expecting.  Surrounded by crowds who were desperate for healing, he spoke these words, “You are the salt of the earth… You are the light of the world…” (Matthew 5:13-16).

Jesus came to teach us and show us what the Kindgom of God was all about.  So he gathered with the crowds and told them that it was up them.  “Let your light shine before the people, so they can see the good things you do and praise your Father who is in heave,” Jesus declared.  He reminded the people that the Kingdom of God is at hand because of their very presence, not in spite of it.  “Unless,” he might as well have said, “Unless people like you, you who are the salt and light of the world, care a whole awful lot…”

Get a Love God. Live Well. Do Good. sticker

One response to “Dr. Seuss Tells the Sermon on the Mount, Part 2: The Lorax”