Dr. Seuss Tells the Sermon on the Mount, Part 4: The Zax 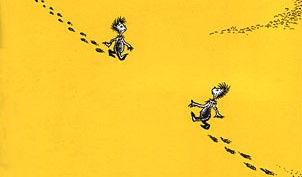 The Zax are lesser-known Seuss creations.  Found in one of the smaller stories within the Sneetches book, they are two creatures full of certainty.  Their paths intersect one day in an open field.  One is going north.  The other south.  They run into each other, and refuse to yield.  Each Zax is certain of his path.  He is certain that there is no other way to go.  There is no room for east or west.  Both dig in, ready for a wait, ready to hold fast to their certainty for as long as it takes.  As they stand there at a face off, a funny things happens.  The world around them goes on.   The story ends with the north-going Zax and the south-going Zax standing face to face, with the world all around them changed.  There are buildings and roads, even a bridge that goes over them.  All around them is progress, leaving behind the Zax and their certainty. 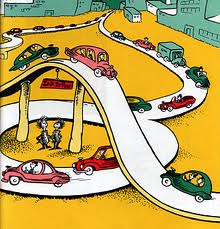 Assurance is a virtue.  I’m not sure certainty is.  Certainty is built on the promise that I am right.  It inspires us to dig deeper trenches, and defend certainty at all costs.  Certainty regards new facts with suspicion.  It does not adapt well to change.  Assurance is built on the promise that I am loved. It is a source of hope and inspires confidence.  Assurance allows freedom for challenge and growth.  I think the world could use more blessed assurance and less religious certainty.

Jesus closes his Sermon on the Mount with a warning.  “Not everybody who says to me, ‘Lord, Lord,’ will get into the kingdom of heaven,” he says (Matthew 7:21).  Faith is not about checking a box.  Faith is not about making your claim, saying a formulaic prayer, and thinking that your ticket has been punched.  “Only those who do the will of my Father will enter,” he continues.  He closes this long sermon, one in which he told them some pretty radical stuff, with a reminder that nodding their heads in agreement, even shouting a few ‘amens’ wouldn’t be enough.  I can imagine after this sermon, the people filing by Jesus, shaking his hand warmly and saying, “Good sermon, teacher.”  The Kingdom of Heaven is about more than knowing what is right.  It is about living each day as if the things Jesus taught actually matter.

The Christian life is not easily defined, and it is not easily lived.  It starts not with having all the answers, but with having the courage to ask the questions.  Religious certainty is built on having all the answers.  It is about picking the right Bible verses to memorize, and standing firm on the right side.  It is built, above all, on being right.  Yet Jesus himself called out those who wanted to draw such clear lines.  To those who memorized all the right Bible verses, he declared “You have heard it said… But I say to you.”  He threw doubt upon all that their institutions and religious righteousness had been built on.

Tagged as children's book, Dr Seuss, kingdom of god, Sermon on the Mount