Feel angry, then do something

For all those that are angered, sickened, saddened, devastated, or outraged by Freeh Report, I want to say this: Good.  Feel that.  Feel anger.  Feel sick.  Feel sad, and outraged.  Feel it all.  Shed a tear.  Punch your desk.  Do whatever you need to do to feel what you need to feel.  Then, once the emotion can settle, do something.  Do something for children.  Do something for victims.  Speak about abuse.  Talk to your children about their self-worth, and teach them to not allow anyone to violate them. Write letters to lawmakers.  Donate to local shelters.  Take all that energy that you are feeling right now and use it.

We need to learn some lessons from Penn State, Joe Paterno, Graham Spanier, Gary Schultz, and Tim Curley.  The Penn State Four covered up for a grown man that was raping children.  When those children needed someone to stand up and shout, “Stop!” silence was their answer.

If you are outraged, listen to that outrage.  Do not let silence be your answer. 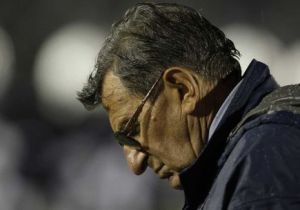 P.S. I wrote this blog, entitled Paterno’s Legacy (not his eternity) in January.  At that time, a few people made comments saying that I wasn’t being fair.  I wonder what they’re thinking now.

Paterno’s legacy (not his eternity)

I believe in a God whose love is more powerful than the worst of human nature, so I stay out of the guessing game as to who is going to be rewarded in heaven and who is going to face eternal damnation.  I don’t have the theological arrogance to try and guess at that sort of thing.

Joe Paterno died yesterday, and the commentaries, columns, blogs, status updates, and tweets started to pour out.  Some of it has been vitriolic.  Some of it has been too flowery to stomach.  Joe Paterno was a man.  He was a sinner like all of us.  He had some great victories, and some terrible failures.  I would not want to be judged by my worst moments, but I’m not judging him as a man.  I do not venture into that realm.  I am commenting on his legacy – the way in which he is remembered.  His legacy and his eternity are two very different things.

Here are few things I have to start with:

Joe Paterno built a strong legacy, and it was on the strength of that legacy that Sandusky preyed (I’m going to allow you to insert the word “allegedly” here because it will get tiresome to type it every time.) on children.  Paterno’s legacy gave Sandusky legitimacy.  It gave him access.

Joe Paterno did a lot of amazing things.  I’m sure that I don’t have a full understanding of all of the positive that he did, but that doesn’t matter.  All of the positives, achievements, and good-will that he created gave him credibility and the moral high-ground in almost every matter.  Most people consider him to be the most powerful man at the university – perhaps the most powerful man in the state.  And it was power that he earned.  It was a power that was based on the values he preached.

Joe Paterno wanted to create a football program that was about more than winning.  His “grand experiment” was about melding football, academics and character.  He wanted to mold boys into men and develop leaders.  He preached about things like respect, honor, accountability, and faith.  He wanted to create something that was good, almost holy.  On the surface, that is exactly what he did.  He created a program that was treated as if it was holy – untouchable.  He had the moral high ground.  This article in 2008 talked about how the program seemed bigger than the institution.  And Joe Paterno WAS the program.

Joe Paterno had the moral authority to stop Jerry Sandusky when he was informed about it.  Instead, he abdicated that authority when he was relatively silent when faced with the biggest challenge of his life.  All of his achievements do little more than make his inaction more inexcusable.  Did Jerry Sandusky fail? obviously.  Did Mike McQueary fail? Certainly.  Should he have gone to the police? Of course.  But he was also deeply enmeshed in a culture of cover-up, and he went as high as he could possibly go – to Joe Paterno.  Did the Athletic Direct, President and the Board fail?  Yes.  They were a part of the institutional mess that lacked the courage to do anything detrimental to the football program.  It seems like even the current governor of Pennsylvania failed.  Why? Because no one wanted to cross Joe Pa.

It was only Joe Paterno that could have stopped Jerry Sandusky.  And he failed to do so.  If we believe that Paterno was told about Sandusky in 2002, then there are many questions to ask.  Why was he still hosting football camps on other Penn State campuses?  Why  was Paterno still involved with Sandusky’s Second Mile Foundation?  Jerry Sandusky used the legacy of Joe Paterno to prey on children.  He gained access, trust, and funds because of his relationship with Joe Paterno, and Paterno let it happen.

I do not believe that I am rushing to tarnish his legacy unfairly.  I am judging it only by his own standard.  He once said, “Losing a game is heartbreaking. Losing your sense of excellence or worth is a tragedy.”  It seems to me that Joe Paterno lost his sense of excellence.  That is (by far) not the greatest tragedy of this story, but it is nonetheless the tragedy of Joe Paterno’s legacy.