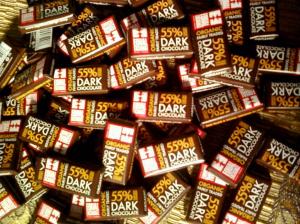 To shop the Equal Exchange chocolate store, click on the picture above.

Justice can be sweet.  Especially when it is mixed with sugar and milk.  Halloween is approaching fast, and it’s not too late to make your Halloween a just one.  Order fair trade chocolate minis today from Equal Exchange, and you can still get them in time for Halloween.

Our church ordered a case of them.  We are going to use a hot glue gun to paste them to postcards to teach people about the benefits of fair trade chocolate.  My daughter, and other kids from our Sunday school, are really excited about the chance to give people chocolate back when they go trick or treating.  The concept known as Reverse Trick or Treating is designed to help spread awareness about the problem of child labor in chocolate production.

Halloween is about chocolate and kids.  Unfortunately for most kids, chocolate is not a source of joy.  Cocoa farms in West Africa and Central America are often worked by child slaves.  Children are treated as little more than cheap, replaceable labor.  The working conditions are often dangerous and they are paid very little.  By keeping labor costs down, the big cocoa farms are able to sell their beans to companies like Hershey’s, Nestle, and Mars at lower rates.

Part of the reason your Hershey chocolate bar still costs less than a dollar is that the child picking the cocoa for that bar is a slave.  That is a real and hard-to-swallow fact.  But we can do something.  Some progress has been made in the last ten years, when this problem came to light.  In February 2012, Hershey’s took an important step in reducing the production of slave chocolate, but they could do more.  Nestle has launched a new initiative to map its entire supply line, making it the first major chocolate producer to do so.

Things like Reverse Trick or Treating help spread awareness of a problem that most people are blind to.  Expose light on the problems of the chocolate industry, and we might make more of an impact.  And remember, if it’s too late for Halloween this year; Christmas, Valentine’s Day, and Easter are just around the corner.  Chocolate is sweet.  Just Chocolate is sweeter.