I am the father of two daughters.  They are young now, but I hope that someday soon they will go to college.  At college, there are often safety tips.  I remember hearing them when I was a college student.  There will be warnings of the dangers of alcohol abuse.  There will be warnings about walking alone on campus, about finding yourself alone in someone else’s room, and even about how to dress.  The vast majority of these warnings will be directed toward girls, warning them of the ways that they can prevent themselves from being raped.

There are various statistics about the prevalence of rape on college campuses.  A quick google search put the number of women that are victims of rape or attempted rape at anywhere between 1 in 50 and 1 in 4.  The truth likely lies somewhere in between.  “Rape Culture” on college campuses seems to be growing, as evidenced by the recent debate that Daniel Tosh sparked when making “rape jokes.”  Much of the problem has lied with college administrations that are unwilling to punish, or sometimes even investigate, men accused of rape.  Notre Dame’s football program was one such case that gained noteriety, but activists across the country have been raising their voices.\

So I decided I would chip in.  I came up with this list of “Rape Prevention Tips For College.”  I think this is almost 100% fool-proof.

3. If there is a girl at a party, and she is dressed very sexy, don’t rape her.

4. If you are with a girl that has had way too much to drink, don’t rape her.

5. If you see a girl, and she is passed out; walk by her, or help her get home, or find her friends.  Don’t rape her.

6. If, at any time, you are unsure if what you are doing is rape, then stop doing that, immediately.

Maybe it is time that we start teaching men at college that raping someone isn’t okay.  Every girl that gets drunk is not looking for sex.  Every girl that wears a mini skirt isn’t waiting for you to get into it.  Should women avoid dangerous situations? Sure.  I will teach my daughters to be smart.  I will likely get them to a Girls Fight Back seminar someday, where they will learn to defend themselves.  I will teach my daughters to protect themselves. 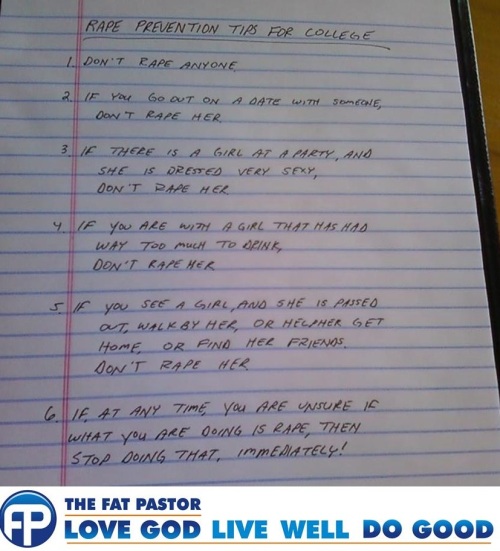