Zacchaeus was a wee little man? 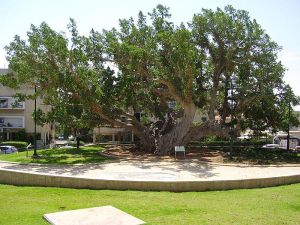 Sycamore trees in America are tall, grand trees that are not easily climbed. This type of Sycamore is found exclusively in Israel. This particular tree is found in Netanya, about 50 miles from modern Jericho. You can see from it’s shape though, that it would be quite easy to climb.

The Gospel of Luke tells a short story about Jesus and a man named Zacchaeus.  It is found in Luke 19:1-10.  I included a link to a site called Bible Study Tools, where you can read two different translations of the story.  The two translations are going to be important, but we’ll get to that shortly.  If you’re not familiar with the story, it is a very simple episode of a short man named Zacchaeus meeting Jesus.  Zach is not only short, but he is a chief tax collector, and a rich man.  When he encounters Jesus (from in a sycamore tree so that he could see) Jesus tells him to get out of the tree because he has to come over for dinner.  The people in the crowd grumbled at this because they weren’t big fans of tax collectors.  As a response to the crowd’s grumbling, and perhaps more importantly, in response to Jesus’ invitation, Zach declares, at least in one translation, “Look, half of my possessions, Lord, I will give to the poor; and if I have defrauded anyone of anything, I will pay back four times as much.”  Jesus responds with praise and repeats the theme of the Gospel of Luke, that he “came to seek and save the lost.”

The story, as told above, is a great story of conversion.  As the traditional interpretation goes, Jesus inspired something in Zach to make him change his ways.  By inviting himself over, and including him in the community, Jesus inspired Zach to change heart.  He re-examined his relationship with money, and decided to live a more righteous life.  This is a reasonable story, and one that is surely good news.  Even with this traditional interpretation, there is some radical love going on here.  First of all, Jesus offered grace to Zach before there was a conversion.  This can be read as a story of God’s preceding grace (or prevenient grace, if you want to use a $20 Methodist word); the kind of grace that comes before we do anything about it.  Jesus indeed came to seek and save the lost.

There is even a sweet children’s song to go along with it, although the song has little to do with conversion.  I read one description of the song that says it is a “reminder that even small people are important.” 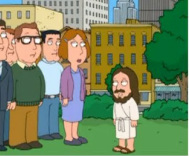 Recently though, I’ve come to see Zach a little differently.  First of all, while it is clear that someone in the story is short, the truth is the Greek is ambiguous as to who the short one is.  Zach climbed in the tree, so everything thinks he’s short, but read that sentence again without assuming that Jesus is the tall hero with long flowing brown hair and perfect complexion.  “He was trying to see who Jesus was, but, being a short man, he couldn’t because of the crowd.”  If a short man was walking in the midst of a crowd, he would be hard to see.  In other words, climbing a tree would be helpful to see over the crowd whether Zach was the short one or Jesus was the short one.  We just assume Zach is short because the hero of the story is never short (unless the hero is a hobbit).

This is really a minor issue.  Jesus’ height isn’t really an important issue, but I believe it reveals to us the way we bring our own assumptions to the text.  We assume that Jesus is the tall one because we want our heroes to be tall, dark, and handsome.

The fact is, we bring our own assumptions to a lot of parties.  Another assumption is revealed in the translation issue I mentioned earlier.  Most translations have a simple word that, at least in my mind, alters the meaning of the story.  After Jesus invites himself over to Zach’s house, Zach says, “I will give…”  The Common English Bible, however, leaves out that little ‘will.’  This is a fact that David Lose pointed out before the Common English Bible existed.  In fact, the ‘will’ is left out of the King James and the RSV as well.  It seems like more modern versions of the text have shaped the story the way we want it to appear.  We want this to be about conversion.  We want this to be about how Jesus’ grace changed the heart of a terrible tax collector, because then the story can be about someone else.  It can be about those terrible people that gained money in illicit fashion, and now must repent.  It demands nothing of the reader.  Since none of us are chief tax-collectors, t’s so easy to simply see others in the role of Zach, and leave ourselves with a gentle reminder that all are indeed welcome to the table.

If Zach’s declaration is not in the future tense, then the story feels different.  Instead of Zach changing his heart because of the grace of the savior, we have him defending himself against a grumbling crowd.  It turns out, he’s been doing what John the Baptist had told him to do.    Back in Luke 3:12-13 we are told that John the Baptist was baptizing tax collectors.  They asked him, “What do we need to do?” John replied, “collect only what you are due.”  It seems like Zach was doing just what cousin John had taught them.

Now, the focus is not on the heart of that dirty-old tax collector.  The focus is on the heart of the grumbing crowd.  Remember too, that “all who saw it began to grumble.”  Not the Pharisees and their letter-of-law strictness.  Not the chief priests and their holier-than-thou attitudes. Not even the disciples, and their always-a-step-behind bumbling.  All of them. Zach is not confessing a change of heart to Jesus, he is defending his honor to the grumbling crowd that assumes he is not worth their time.

The uncomfortable truth is, the story of Zacchaeus reveals more to us about our own grumbling hearts than it does about his own.  It’s no longer easy to see Zach as some wretch who was saved by Jesus’ compassion.  Instead, we are forced to see him as someone who was excluded from society because – dare I say – the assumptions that were made.  Who else do we refuse to see?  Who else do we judge by their credentials, and deem unworthy?  How many times have we seen the grace of God, and thought, “he doesn’t deserve that.”  How often do we grumble without knowing?

Zacchaeus wanted so desperately to see Jesus that he was willing to risk humiliation.  He was willing to venture out into the crowds that would surely reject him.  But it was not Zacchaeus who saw.  Instead, he was finally seen.  He was seen by Jesus – spotted there up in a tree, not exactly a place of dignity and respect.  He was seen by the unforgiving crowds.  He was seen by those who would do their best to not see him.  Maybe in the end, that’s all any of us really need.  To be seen, not as a job title or a resume.  Seen not as a role to fill, or a caricature of what others think we should be.  Simply to be seen, as one who was made in the image of God.  To be seen simply as one who fails and wins, who cries and laughs, who has lost and loves.  To be seen by Jesus, even as we risk humiliation and scorn, and be invited to come to the feast.

Listen to the Pulpit Fiction Podcast about Zaccaeus