“Why I’m rooting for the 49ers,” or “The Shot Heard Round My Backyard” 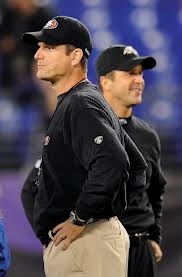 Jim Harbaugh is the head coach of the San Francisco 49ers.  This Sunday Jim is leading his team into the Superbowl, and on the opposing sidelines will be his oldest rival, his big brother John.  Jim and John Harbaugh have justifiably received a lot of attention these last two weeks.  The Harbaugh brothers have reached the pinnacle of the football world.  On Sunday they will share the biggest stage in the world.  Not too long ago, they shared a bedroom.

Jim and John Harbaugh were born 15 months apart.  They were fierce competitors growing up.  Gifted with more natural talent, Jim went farther as an athlete.  He was one game away from playing in the Superbowl as the quarterback of the Indianapolis Colts.  Yet here they are, meeting as head coaches at the top of their career.

There are other famous pairs of siblings in the sports world.  Peyton and Eli Manning, and Serena and Venus Williams are two pairs that have made some headlines.  In most of these matchups, I tend to root for the younger sibling.  I root for the little brother because I know how that feels.

This not my brother and me, but anyone that thinks wresting is fake has never been trapped in a figure four leg lock. This happens to be Ric Flair on the right, playing my brother, and I believe Steve Austin on the left, playing me.

My brother and I were born almost six years apart, so we weren’t exactly rivals.  My younger years were spent in perpetual servitude and resentment.  Yet at the same time, my older brother was always there.  He was someone for me to look up to and emulate.  He showed me how to swing a bat and a golf club.  He taught me how to put together a hot wheels racing tournament with my cars.  He taught me how to build lego cars, card houses, and do card tricks. He was even willing to demonstrate on me how to do a D.D.T, a Figure-four Leg Lock (pictured), and a Camel Clutch.  In time, he became my best friend, and we stood next to each other at each of our weddings.  There was no thought to asking anyone else to be there for me in that moment.

My big brother was always there.  Sometimes he made me angry enough to cry or scream or attack with a ferocity I didn’t know I had.  One time he tickled me until I puked.   Most of the time he was teaching me something.  And he taught me so much, the important stuff and trivial stuff.  He taught me about girls and sarcasm and sports, and life.  He taught me to like chocolate and peanut butter ice cream, and the Macho Man, and Seinfeld.  My big brother is the smartest person I know, and there are few people with whom I laugh more.  He still teaches me stuff.  I still look up to him, even though he stopped being my “big brother” by the time I was about 15 years old.

That’s why I usually cheer for Eli and Serena, and why I’ll probably be cheering for Jim (although he is kind of a lunatic, and I think I’d rather play for John).  I know a little of what Jim will feel when he looks across the field and sees John: pure love, admiration, and respect; and a desire to beat him that is pure and burns white-hot.

I didn’t beat my brother much growing up.  He was bigger than me, stronger than me, faster than me, and smarter than me.  It wasn’t until I was about 15 or 16 when some of those things started to change.  My brother and I had some epic basketball games over the years.  Some were Nerf games, where he had to play on his knees and there were no holds barred.  Some were on our back patio, where the flowers were out of bounds, the crack was the three-point line, and you had to take the ball back to the grill.

The summer after I graduated high school was our last summer together.  That fall, he started his second year of medical school,  and I went off to college.  We played a lot of basketball games that summer.  One-on-one, to 30, winner’s outs, win by two.  There were a series of intense games.  I discovered I had a distinct advantage inside.  He was still quicker than me and a better all-around athlete.  All were close, but he won them all.  He had a winning streak that dated back to the early 1980s.  It was the kind of streak that the Harlem Globetrotters could envy.  Finally, The Streak ended.  It was an intense game.  We were well into the 30s, going back and forth.

Michael Jordan’s last shot with the Bulls is one of those plays that is ingrained into the collective memory of thousands of basketball fans.  I can still see it as vividly today as I did when he hit it to beat the Jazz for his sixth World Championship.  Jordan’s shot, and that memory, have the distinct advantage of having been shown over and over for years.

The Shot was not recorded.  The only spectator was my Mom watching from the kitchen window.  Yet it was ingrained into my mind as clearly as any of my sports memories.  I have watched my teams win World Championships.  I jumped out of my skin as the Illini came back against Arizona.  I wept openly when the Paul Konerko clutched the last out of the 2005 World Series, and I still get goosebumps when I recall the Phillies beating the Devil Rays.

None of these moments are as important to me as the time I drove to my left toward the baseline, backed in a little, then pivoted to face the hoop, and took a little jumper leaning away from the basket from about five feet, just in front of the rock garden in the corner, and I beat my big brother.  It was, at the time, the greatest moment of my life.

Covered in sweat, drained, and tired, I simply pumped my fist.  We went inside.  Mom asked us, “Who won?”  I don’t think either of us answered with words.  We didn’t have to.