Every morning I build my own little Tower of Babel 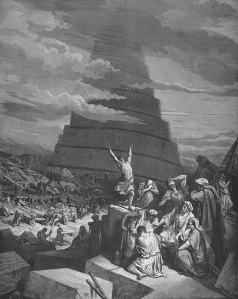 Gustave Doré, found at http://www.textweek.com Art Index. Click on the picture for more from the artist

I held my daughter.  I crawled into her bed, and wrapped her up in may arms.  She nestled deeper into me.  I smelled her hair and kissed her soft cheek.  She took my hand, and pulled it under her head like a pillow.  The alarm clock flashed 6:30, but time stood still.  I prayed, thanking God for this moment.  I paused, And allowed. Myself. To. Stop. Breathe.  Deeply.  She was safe in my arms, and there was no reason for either of us to ever get up.

It would have been so easy to just remain there.  She was safe and warm, and as long as I could keep her there in my arms, nothing bad could happen to her. As soon as I whispered into her ear, “It’s time to get ready for school,” I would lose my grip.  As long as I held her there she would come to no harm.  She couldn’t have an accident.  She couldn’t stub her toe, or burn her hand, or get hit by a car.  No one could hurt here there.  No one would call her stupid or make fun of her shirt.  No one could exclude her from a game or break her heart.  We lay there together, drifting in and out of sleep, and there was no reason at all for us to rise.  Except for one: Babel.

The Tower of Babel story is found in the 11th chapter of Genesis.  The first 11 chapters are generally recognized as a separate section within Genesis.  Walt Brueggemann refers to it as the “Pre-History.”  Terrence Fretheim calles Genesis 1:1-11:26 the “Primeval Story.”  This section of Genesis includes the two creation stories, the first sin and expulsion from the Garden, the murder of Abel, and Noah and the flood.  These are the foundational stories of God and the people God created.  It is a myth in the sense that it is a story that explains why things are the way they are.  And like all myth, the truth of the story does not lie in the facticity of the events, but rather in the meaning we draw from it about God and God’s created people.

All people on the earth had one language and the same words.  When they traveled east, they found a valley in the land of Shinar and settled there.  They said to each other, “Come, let’s make bricks and bake them hard.” They used bricks for stones and asphalt for mortar.  They said, “Come, let’s build for ourselves a city and a tower with its top in the sky, and let’s make a name for ourselves so that we won’t be dispersed over all the earth.”

Then the LORD came down to see the city and the tower that the humans built.  And the LORD said, “There is now one people and they all have one language. This is what they have begun to do, and now all that they plan to do will be possible for them. Come, let’s go down and mix up their language there so they won’t understand each other’s language.”  Then the LORD dispersed them from there over all of the earth, and they stopped building the city.  Therefore, it is named Babel, because there the LORD mixed up the language of all the earth; and from there the LORD dispersed them over all the earth. (Genesis 11:1-9, Common English Bible)

Beyond the simplistic questions about historical accuracy, there are deeper theological truths that can be found from this story.  There are also troubling questions about the nature of God that rise quickly from the scattered remains of the people.

The main question is, “Why did God do that?”  It seems like a strange God that is in action here.  “There is now one people,” God declares.  This kind of unity sounds like a good thing.  In a world beset with division, barriers, walls, and wars, a united people sounds like a wonderful place to work toward, not a troubling situation that needs to be fixed.

The common interpretation of this passage is that the sin of the people was hubris.  Many see the problem to be the grandiose plans. The sky, they say, is no place for humans, but instead is the realm of God. The sin of the people was to make themselves too high, and to try to compete with God.  To understand the sin of Babel though, we must look closer at the motivation for the tower, and go back a little farther in human history.  The people state the mission of the tower is to “make a name for ourselves, so that we will not be dispersed all over the earth.”

The Tower would be a source of pride and strength.  A tower is an important part of any settlement.  The Tower draws travelers for trade.  Conversely, it helps detect invaders from a distance.  It provides a strategic advantage for defense, and serves as an economic hub.  The Tower is an important ingredient in protection, safety, and settlement.  The people knew that the tower will keep them from being scattered.  These things do not, on the surface, appear to be troubling.

It is no more troubling than laying in bed in the morning with the one you love more than anything in the world, and deciding to stay there forever.  Protection, safety, and settlement are not necessarily vices, but they are not innately virtuous either.

A look back at the beginning of the Pre-History reveals to us the problem with the Tower.  Look at the first creation story.  The work of God was started to create order and life out of chaos and emptiness.  This creative work culminates in Genesis 1:27-28, where God not only creates humans, but gives us mission in the world.

God blessed them and said to them, ‘Be fertile and multiply; fill the earth and master it. Take charge of the fish of the sea, the birds of the sky, and everything crawling on the ground.'” (Genesis 1:27-28, Common English Bible)

God said, “Be fruitful and multiply.  Fill the earth and master it.”

The sin of Babel was disobedience.  Moreover, the people were creating their mission.  God gave them a purpose, and they were refusing to act.  The languages then, were not given as a punishment.  The languages were given to people to help them get the job done.  Not the job they intended, but the job God had given them.  What has often been seen as a curse is actually God empowering the people to do what they would not do on their own.  With this nudge, the Scriptures tell us that the people scattered.  They fulfilled their mission, were fruitful and multiplied.

I understand the sin of Babel, and I understand the gift as well.  I thank God every day for giving me those nudges.  Time and again I have thought to myself, “I’m settled.”  It seems like every time, God is there, confusing my language, pushing me to a new adventure, a new relationship, or a new mission.

Every morning I wake my daughter up to get her ready for school, I build my own little tower.  I crawl into bed with her and wrap her in my arms and want so badly to keep her from being scattered.  Every time I whisper into her ear, “Honey, it’s time to get ready for school,” I break the tower down.  It is one of the hardest things I do.

Settlement and safety are not inherently bad things, but anything that works against God’s mission for the world must be worked through.  It is so tempting to hold her and never let go.  It would be so easy to keep her in my own Tower, but in trying to protect her, I would be hurting only her.

God has great plans for her.  I’m not sure what they are, but who am I to get in her way?  Who am I to ignore God’s calling on her life?  She is made to love, to share kindness, to work for justice.  She, as she has said, “was born to dance.”  No one can dance with their Daddy weighing them down.  So I help her to get ready.  I send her out in the world equipped as best I can.

I kiss her goodbye, go upstairs and wake up her little sister.  Maybe I can stay in the tower a little longer with her today.