Mascot Bracket 2015 is a new game. We’re going “Battle Royal” style. Each site in the tournament will be a separate four-team battle. Throw them all in the ring, and see which mascot emerges. A couple ground rules, this year we’re going with pure Mascots. I gather as much information as I can about the mascot from their logo or the actual running-around guy in the costume. I’m taking everything that the mascot has on its person at face value. All weapons are allowed, but only if they are depicted with a weapon in official logos.

Omaha Battle: Wisconsin Badger, Coastal Carolina Chanticleers, Oregon Ducks, Oklahoma State Cowboys. This battle can be renamed, “Target Practice.” Two birds and a badger would be no match for the gun-toting cowboy.

Jacksonville Battle: Arkansas Razorbacks, Wofford Terriers, North Carolina Tar Heels, Harvard Crimson. A very interesting battle between three animals and a color. The color in the past has always meant certain doom, but since I’ve switched to mascots instead of nicknames, Harvard has a chance. The only problem, I cannot seem to find any mascot or logo for Harvard that isn’t just an H on a red shield. Wofford’s entry of a cute little Boston terrier probably wouldn’t last long. While the North Carolina nickname has roots in the Civil War, they now use a ram as a mascot. Wild boars are some of the most fearsome fighters in the animal kingdom. Rams pack an impressive amount of power, as seen in this National Geographic video. This seems like a toss-up, but I’ll lean lightly toward the Razorback because of the sharpness of those teeth. Hakunamatata.

Ole Miss ditched the plantation owner in favor of the preppy bear, thus missing a golden opportunity to have the greatest mascot ever.

Jacksonville Battle 2: Xavier Musketeers, Ole Miss Rebels, Baylor Bears, Georgia State Panthers. Colonel Reb, the old man leaning on his cane, was over ten years ago. In 2010, there was a contest to choose a new mascot. Some believe the rightful winner of the contest was none other than the trap-recognizing Admiral Ackbar. If they had, they would be the odds-on favorites to win this thing. The school however, adopted Rebel Black Bear as their official mascot. This leaves us with two bears, a panther, and a guy with a sword. I don’t see the sword-yielding musketeer getting very far in this battle, so I’m invoking the higher-seed rule. Plus, I think the suit coat and tie would limit Reb’s mobility in a fight.

Portland Battle: VCU Rams, Ohio State Buckeyes, Arizona Wildcats, Texas Southern Tigers. Another interesting battle between three animals and a Brutus. In the past, the Ohio State Buckeyes never stood a chance. The plant always lost to everything. This year though, I’m using the mascot instead. They have a fighting chance. Brutus is basically a human with a huge head. With no visible weapon, he hardly seems like a formidable foe. This battle comes down to ram versus tiger. Another tough choice, but I think the tiger would stand down against the power of the charging ram.

Los Angeles Battle: In the battle for the Final Four, I think the Cowboy has the clear advantage, if he is a good shot. The bear, ram, and razorback are all tough outs. One missed shot, and he’s in trouble. I’m not even sure if a six shooter would be enough against a bear in close-up combat, but I have to stick to the rules, and push Oklahoma State into the Final Four 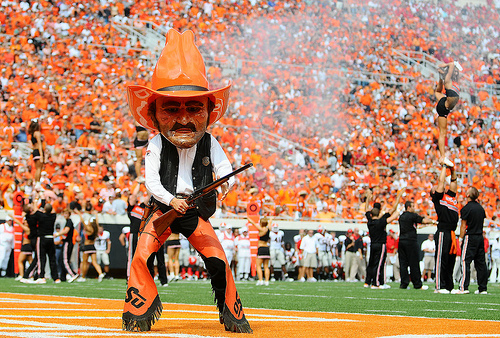 The OK State Cowboy has a high creepiness factor with the regular body and the plastic head, but it’s that piece he’s carrying that puts him into the Final Four.