Bullets on the Tennis Court, or Mission trip to East St. Louis, part 1

There was a bullet on the tennis court.  Not a spent shell. A fired bullet. Among the mess of leaves, sticks, and broken glass, one of our youth reached down and picked it up, looked at it for awhile then said, “I found a bullet.”  I knew right away he wasn’t joking.  I looked at the little cone-shaped piece of metal.  I don’t know enough about guns and ammo to know anything about its caliber, what weapon it was fired out of, or any details.  There was probably something else we could have done with it, but all I said was, “throw it away.”  So he tossed it in the garbage bag and we went about our business of cleaning up the tennis courts at Lincoln Park in East St. Louis, Illinois.

We were a group of nine youth and three adults.  Some were inside the Mary Brown Center, working with some kids from the neighborhood.  Most of us were outside sweeping.  It was unseasonably cool for late July in Saint Louis.  It was a gray morning, and we were looking for something to do.  Miss Terry had told us that the tennis courts were unusable because of all the broken glass, so we decided to try and sweep it up.  We had some rakes, brooms, trash bags, and a dust pan.  We raked the sticks, leaves, and grass into big piles and swept the broken glass into the dustpan.  Even when we were joined by about a dozen youth from the neighborhood, most working for a few dollars an hour, we realized there was no way we were going to clean up the courts entirely.  By the time we finished though, I would have felt a lot better about kids playing there, as long as they had good shoes on.

Of course, it was entirely possible that once the sun went down, the park would be filled with young people with nothing better to do than throw their empty bottles into the courts.  Miss Terry hoped though, that the presence of people cleaning it up would discourage them.  We could hope.

The first day of the mission trip did not go exactly as we had planned.  We had planned to show up at the Mary Brown Center at 8:15 so we had plenty of time to set up our version of Vacation Bible School for the 25-30 seven to nine year old kids that would arrive at 9:00 a.m.  We had planned to spend the two hours with them in neatly divided groups so we could have 20 minute sessions of worship, devotion, Spanish, art, dance, and closing worship.  We had planned to stay to do some other kind of chores around the center until having lunch, and then going about the rest of our day in Saint Louis.  They say that if you want to give God a good chuckle, tell him your plans. 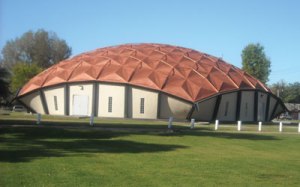 The Mary Brown Center is a part of Lincoln Park. The geodesic dome houses a beautiful gymnasium. The Center is also home to most of the youth programs of the Lessie Bates Davis Neighborhood House.

On the first morning drive to the Mary Brown Center, I got turned around.  I took the wrong exit after crossing the bridge.  I read the map, but the streets I wanted to drive did not go through.  After a process that included about four u-turns, our two minivans arrived at the Center at about 8:50.  We were welcomed graciously by Miss Terry.  She gave us a quick tour of the facility.  There are two main sections of the Center.  There is the beautiful domed structure that houses an immaculate gymnasium, and there is the education wing, home to a computer lab, a youth room, a dining room, offices, and a larger room with tables for seating and table games.

During the tour she told us about the pool, which would be opening for the first time in five years, and the tennis court, which despite having the money set aside for new nets, rackets, and balls, was unusable because it was covered in broken glass.  We unloaded the vans, started setting up our stations, and waited for the kids to start coming.  At about 9:30, there were about four kids.  That’s when I asked Miss Terry what else we could do.  I thought of trying to clean up the courts.

Some stayed inside with the kids that came, and as the morning went on a few more trickled in, and others swept the courts.  That is when I felt the futility of what we were trying to do.  We were invading this space, not sure of our place, unsure of our role, wondering what the mission of this trip was really going to be.  We had all the right plans, but the reality of the situation weighed heavily on my heart.  And then we found the bullet.

“What the heck are we doing here?” I wondered.  Then I kept sweeping.  I could pick up glass, and if that was all I was meant to be doing, then I was going to do it well.  We worked for about an hour and a half.  When we left, there were still young people sweeping in the courts.  There were others outside the fences, laughing at those that were foolish enough to pick up a broom.  Later I talked to our youth about the courage it took to remain there while their friends taunted them.  We agreed that those that remained there to clean up their park were among the bravest people we had ever met.

To Miss Terry’s enormous credit, she sat down with us for awhile before we left and taught us about what the Lessie Bates Davis Neighborhood House was all about.  She told us about her struggles as a community leader.  She told us about the kids on the corner with no hope.  She told us about the adult leaders that give their time and their energy so that they did not have to lose another kid to the street.  When I asked her, “What do you mean by lose them?” I knew that the only answer anyone needed was that bullet we found on the tennis court.

2 responses to “Bullets on the Tennis Court, or Mission trip to East St. Louis, part 1”